Dabbling In B/W Film Photography with the Olympus OMG

This is my experience with film photography using the Olympus OMG camera including processing black and white film. 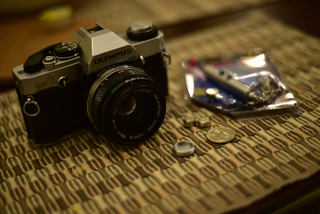 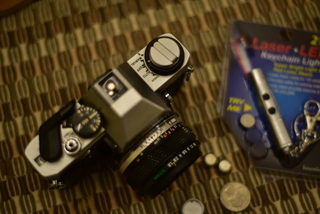 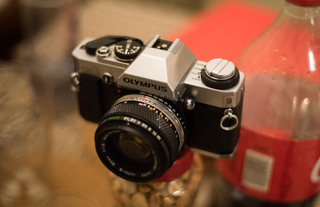 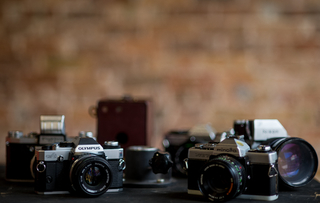 In the years before digital photography, all the experience I had with film was with point and shoot cameras and film development was done through a store. Interestingly, I did want to have an SLR when I was younger but at that time it was not cheap and we probably couldn't afford it. Now when digital photography so ubiquitous, I happily  stumbled upon the opportunity to get my hands dirty with film photography.

A fellow photographer friend of mine Julius Gotiong , was kind enough to give me his garage sale/estate sale "find" Olympus OMG SLR camera. He gave it to me when we visited quaint Fitzgerald GA. He invited us that weekend for the Fitzgerald Balloon Festival. He told me that the camera needed two SR44 1.5V batteries. Apparently without these, the shutter mechanism does not "return" the mirror back down and you can't forward the film to the next frame with the lever. The batteries were available in Walmart but they were $5 each. The crazy thing was, on my way out of the checkout counter, I saw a laser pointer for $4 and it had 6 pieces of the same batteries included in the package. So of course, I chose to buy the laser pointer instead.

The next thing I needed was film. Incidentally, I just bought a digital camera from a local store, Dixie Theater, where the owner, Linda Appleman, told me that had I bought a camera from her in the old days, she would have given me a roll of film but since I got a digital camera, I did not get any. So I went back to her store and took that offer for free film anyways. She was kind enough to oblige and taught me how to load the film in my camera. She also told me who I could ask to help me withdevelop the film.

Everything was falling into place, I have my film and camera and so far I have only spent $4 for the batteries to get the camera ready to take pictures.

THE FILM:
I had the fortune to be given a Kodak Tmax black and white ISO 400 film. Today, with digital cameras, we are so spoiled with ISO adjustment and even auto ISO. With film, you actually need to figure out in advance what ISO type film you'll require for a specific shoot. ISO 400 is a good film to choose but you must understand that it has limitations. With this film, I wasn't able to adjust the settings of the camera and prevent overexposing the shots on the beach. Some cameras might have faster shutter speeds and some lenses could be stopped higher but the fastest shutter speed I could get on the OMG is only 1/1000 sec and f/16 on its 50mm lens. That means that I had to shoot within the limits of the camera and film.

USAGE:
The first thing you notice with the OMG is how small it is compared to the new DSLR's. It's like you are holding a micro 4/3rd's camera. The build quality is very good, I mean very good compared to most modern DSLRs which I must admit feel like plastic toys compared to this camera. Maybe its just me, but this being made out of metal makes it feel expensive and premium. It is no wonder why some new cameras like the beautiful "graphite" Fuji-film X-T1 and the Nikon DF DLSR have gone back to that retro look and feel. If this was my only camera I would have enjoyed it so much. Unfortunately, I have a DSLR camera which is better than this and I ended up leaving it in the house or the car whenever I go out taking photos. Overall this camera is a joy to use, the feel of the knobs, the click of the shutter, advancing the film through the lever is very precise and wonderfully tactile.

FILM DEVELOPMENT:
Now that I have used the 24 frames of film, it is time to process it. Developing film is one of the most interesting aspects of film photography.  If you are a person who likes processes and rituals, this will be something up your alley. There is something almost magical about the process of developing film, its like an elaborate rain dance and if you move precisely with the timing and go through all the steps you'll get the results you asked for. Of course the process has nothing to do with superstition. It is basically chemistry and you just need to follow the simple steps of processing your film. Members of our photography club are very helpful. Jay Elliot actually, was kind enough to show me how to do it.  We used one of his bathrooms as a dark room and developed the film right there.
Here is a website that explains more about film developing:
http://www.nathanjones.com/articles/developing-film-3/
This is one that helps you with the developing chemistry volume and temperature:
http://www.digitaltruth.com/devchart.php
This is one are images from a friend of mine who shoots mostly film:
https://www.flickr.com/photos/124859840@N03/

Conclusion:
I enjoyed my run in with film photography and now I understand why some people are still doing it. Not knowing how your images will come out right away or getting an image that has a different look and feel to it is thrilling. You can digitally make your pictures look like they were shot on film but it is impossible to exactly emulate it, film photographers can spot it a mile away. I will keep the camera handy and ready with loaded film but I have not gotten the film photography bug, yet. Film photography is fun and it has definitely gotten cheaper and within reach to more people especially with used cameras and lenses that are available online. You can buy a camera with lens like mine on Ebay for about $50, I am sure anybody who loves taking pictures will enjoy the experience. I recommend trying it out!